Goal: try to land on the grey platform before the platform beneath you disappear

Super Triangle has a super game feel.  The stretching animation of the small triangle and the rotation of the triangles are very satisfying. Since this is an endless game, I am tempted to keep playing it as a passtime.

My suggestion would be to add background music to the game, which can compliment the game's fast yet endless pacing. Also, I hope there is a way to keep track of my scores, such as how long I survived or how many jumps I made.

I really enjoy the neat and clean aesthetic of this game. Nice choice to use the drum beat as the sound effect, it gives the game a kind of music game vibe as it goes faster.

My only suggestion will be to make the start easier for players. It seems like  players always start with only one grey platform to be landed at first, then player may encounter scenario with 2 or 3 platforms. Maybe start with having three grey platforms, and as player go further, the number of grey platform will go down.

Lastly, I like how the animation in background changes slightly to reward players when they land at the center of a platform. This is so subtle. But once you notice it , it just feel really clever and just the right amount of feedback. That's probably my favorite artistic choice about this game!

I don't have too much to criticize about Super Triangle itself - the controls are responsive, the presentation is clean, stage transitions are smooth, the difficulty ramps up at an even pace, I like how the drums seem to beat faster as the game's speed increases, I had fun once I got into the groove and began darting from triangle to triangle - my biggest concern is that the mechanics aren't well-communicated. I almost gave up on trying the game because the instructions refer to the diegetic timer as a "platform beneath" the player. I assumed from this that I could collide with the timer and that there was some form of gravity involved, and so waited for an opening before pressing the space bar. Of course, nothing came of this, and it's only when I took the game's appearance at face value that I started making real progress.

Otherwise, I think the idea of being rewarded for landing at the center of the grey triangles is great and should be expanded upon with some form of scoring system (I wouldn't have even noticed that precision had an influence on the timer if I hadn't read the instructions). I'd probably have played Super Triangle a whole lot more if there was a number counting up my successes, and the added nuance provided by the precision mechanic could've provided greater incentive to play well.

Lastly, and this is a very minor point, the plain "Retry" text clashes pretty heavily with the otherwise minimalistic aesthetic, and I think players would understand how to reset the game well enough without it, since everything is done with just one button. 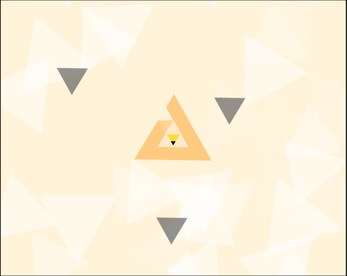